Belgium. Another roller coaster. This post is going to be LONG, so bear with me. The general itinerary was 10 leg days in a row with pretty buildings and horses of Bruges, followed by cleaning up acres of addicts’ campsites at Dour Music Festival.

I started with an all-nighter in Brussels, wandering the streets at night and sitting down in front of a bar with a couple of Canadians, who I spent some lovely hours chatting with. The next morning I hopped on a train to fucking Bruges (it really is like a fucking fairytale or something) and was at the hostel by the check-in time only to find out that check-in opens in three hours. I spent these fucking hours going zombie-mode on the streets of fucking Bruges and accidentally managed to do ca five identical laps around the block. Was…uh…interesting. I then sat down by the fucking canal exactly at the point where people would stop and group around me to stare at a nest of baby swans on the opposite side of the canal. -_- after the fifth group of tourists going “Ahhhh, how cuuuute!” in my face, I decided to change my position. And that concludes the ranting part. ^^ 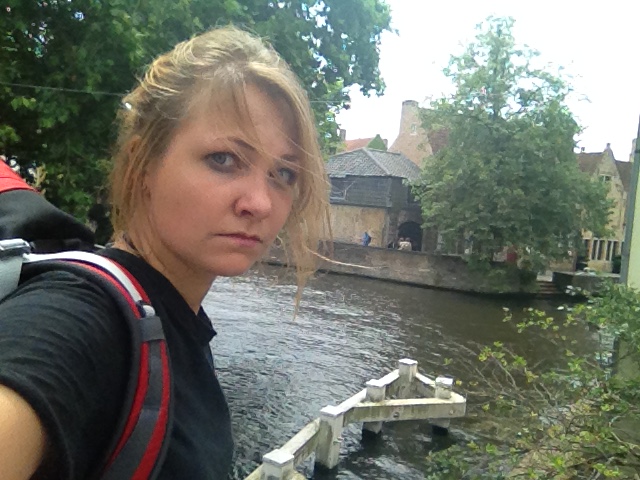 Beautiful swans, yah, we get it + I-haven’t-slept-for-27-hours-what-do-you-mean-check-in-is-in-3-more-hours?! face.
I shared a room in the hostel with a Swedish guy and two Argentinian guys, who all were super friendly and generally very cool people. I managed to have a 5-minute brief conversation with the Swede (who I had an awful lot in common with. C’mon, we both use Viber…) and when the Argentinians stepped in, the conversation went a little something like this:
“So, where you guys from?”
“Sweden.”
“Estonia.”
“Did you both just arrive?”
“Yes.”
“Yup.”
“And how long are you staying in Bruges?”
“Three days.”
“Three days.”
“And then you’re going to…?”
“Brussels.”
“Brussels.”
“Oh. So you guys are together..?”
“NOOooo!”
“Nu-uh, nope, we met 5 minutes ago.”
“…ok.”
Then I took a shower that dreams are made of and went to sleep at 3 pm. 🙂
I quite liked the design and the vibe of Charlie Rockets Youth Hostel, but if you’re not an “I don’t care as long as I have a bed and a shower” type of person, who enjoys loud rock music, then perhaps this place is not for you.

On the same evening and the following days, I pondered the streets, had Belgian waffles with ice cream, visited the bell tower and stepped into a couple of pubs with my new Swedish friend. I’m actually really happy I had someone to explore Bruges with. Good times. 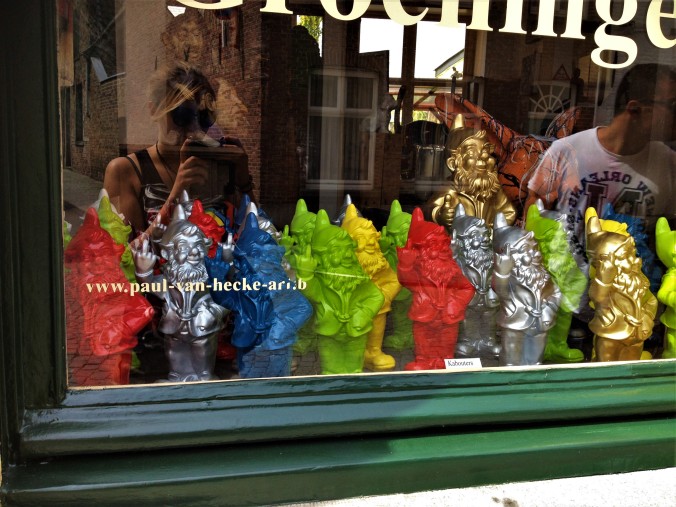 We’re on the reflection here with the rude (yet cheerfully colorful) gnomes. Belfry of Bruges. View from the bell tower. A really nice and quiet courtyard we found in the heart of Bruges. We also observed two tourist groups going through the place and decided the first group got a lot more for their money than the second one.

I also managed to film some of the things I found beautiful in Bruges. It’s a random selection of footage with sad background music by the one and only Dodie Clark. Do enjoy in HD:
No thoughts, but places – Bruges
It was originally a “Thoughts from places” video, but I found the thoughts to be insignificant compared to the cringe that hearing my own voice brought me, so I re-edited.
Last day in Bruges – RAINY! But selfie game strong. 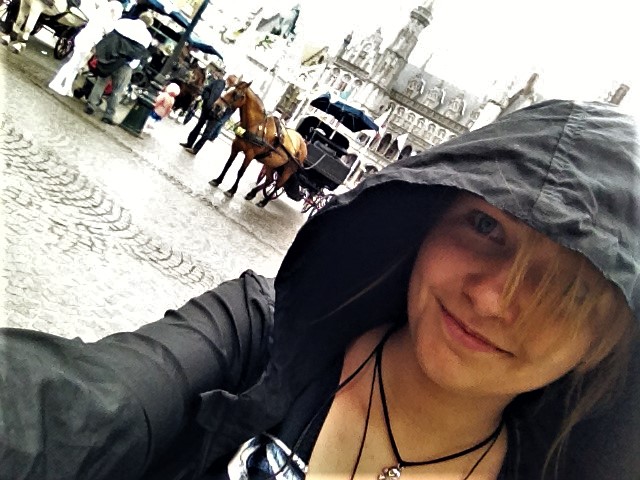 With Bruges, I lost contact with the “real world” and stepped into the insanity of Dour Music Festival.

I met up with my volunteer team at Brussels Central Station on the 11th of July and together we made our way to the festival grounds. Our team was a mix of Belgium, China, Estonia, France, Italy, and Russia. I liked them. Though one of the girls I only saw a couple of times during the entire festival (whenever she was floating by our tents). Fantastic fairy-like skirt she had. Matched her bra beautifully.

Picture from our camp leader. 🙂
We were staying at a camping site reserved only for volunteers and if at first, it seemed like a huge campsite with limited showers, then after seeing the festival-goers campsites…it seemed like heaven. After setting up our tents, the first question was “So, shall we go alcohol shopping?”. And that’s my Dour festival all summed up. Thanks for reading! 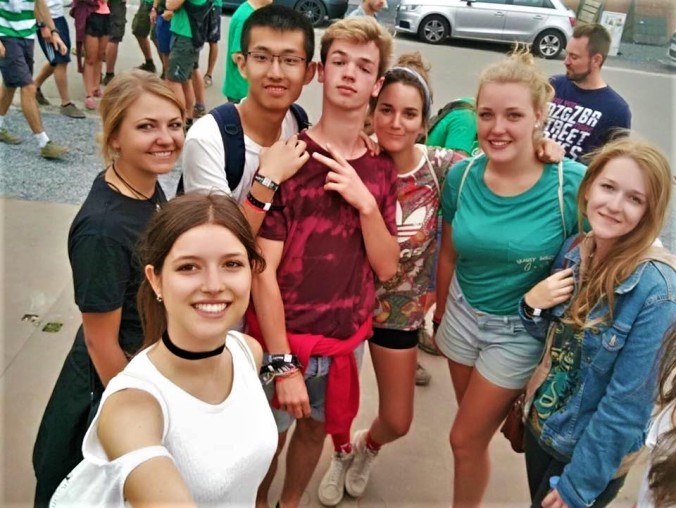 Just kidding. There was also A LOT of drugs and a lot of DOUREUUUUH! Now it’s all summed up.
I have barely any photos of the festival because I was taking them with my phone and I uh…had my phone stolen at the last hours of the festival. I may have cried. Someone may have witnessed this. No evidence though. I’m a strong independent black woman who need no phone to get home. I did need my credit card that I found near my wallet (also stolen, emptied and then dropped). But let’s not rush ahead of ourselves! I still had my camera that I used for filming!
Here’s a recap of my Dour experience:
Dour mon amour
I can already hear everyone going “Aghhh, 7:33, Taisi pls…”, but LOOK NO FURTHER! THERE IS A SHORTER VERSION OF BLURRY CLIPS OF RANDOM PEOPLE ON DRUGS! You’re welcome. 🙂
Dour mon amour (short)
My favorite performances were by Crystal Castles (Fuck YES. Front row. Edith killed it. Still love Alice. But Edith killed the show. I’m torn. Don’t judge.), Temples (Exactly what I expected from them), M.I.A. (Main stage, huge show, good good), Die Antwoord (Almost died in the moshpit, but the show was still awesome), Camo & Krooked (Did not plan on seeing, but it was surprisingly enjoyable), Pendulum (Good old, totally worth staying up until 4 am), Kölsch (Belgian guy trying to teach me about techno music).
Basically, I managed to work out a routine for the entire festival – get up at 7-8 am, shower before others wake up, eat breakfast, go to the festival grounds and stare (very intensely) at stage technicians getting everything set up. Sound, lighting, props, banners, everything. I think this was the most interesting part of the festival to me. At 2 pm we had to go work on the campsites with my volunteer team. We recycled everything we could (and went to eco-change to exchange trash for drink tickets because we were smart…and thirsty) until 8 pm. I think there was not a single day we worked for more than two hours. o_o We simply “beeped” at 2 pm, worked an hour or so, enjoyed some concerts, chilled at our campsite, “beeped” out of work, received our food ticket (a sandwich per day, bless you, Green Cross) plus four drink tickets and continued enjoying ourselves with dinner, drinks, and concerts.
Recycle! #squadgoals

Oh, and we met some pretty cool people on the campsites as well. We were even offered beers, wine, and water.
Some more pictures by me:
This is where I had my first Jack & Coke. It was not bad.

No clue who these guys are. o_o 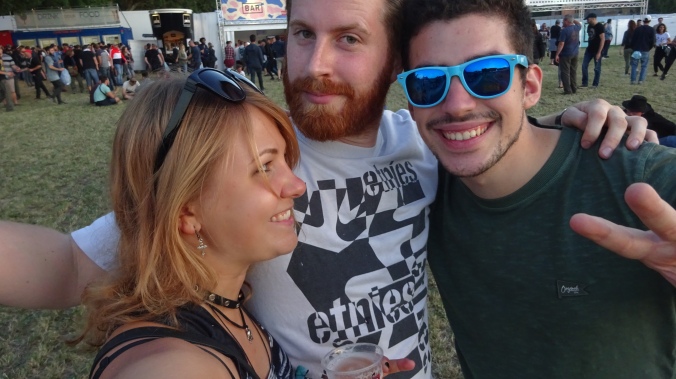 On the next to last evening, I met the only decent Belgian guy. Or so he claimed. I was getting drinks for Die Antwoord concert and bumped into him and his two friends (who stole my drink and ran) by the bar. The decent one followed me to the main stage to see Die Antwoord. We ended up exchanging numbers so we could meet up the next day as well (as it was all techno and I didn’t know what shows to see). And on the last day…I texted my sister that I was going to meet up with someone for pizza and concerts. We met up, he introduced me to his friends (again) who turned out to be more quiet and awkward than me on my darkest days full of social anxiety. We didn’t stay around to chat. The evening progressed with some more texting with my sista and then at one point I woke up in the back of a trunk, in complete darkness, kidnapped, and just as I thought I was going to die, it turned out the Belgian only wanted my phone and my wallet. Haha, decent after all. Okay-okay, that’s not what happened. We were at the Kiasmos concert (I think…I’m not the best at techno, I’m sorry) and at one point I realized my bag was open and my things stolen. 😥 We looked around, but couldn’t find anything but my empty wallet, credit card, and ID card. Scrolling fast-forward, next day I got up at 7 am, packed up, wrote a goodbye note to my team, took a bus, a train, a panic attack in Brussels, a train, a bus, a plane and finally met up with my sister in Riga! I had no voice (because Belgium = sun-cold-rain-sun-cold-sun-hot-cold-rain-etc and Dour = dust), so I had to tell her everything twice – first without audio, then squeaking. I really admire her patience for listening.
And that, ladies and gentlemen, was the cultural shock of DOUREUUUUUH! 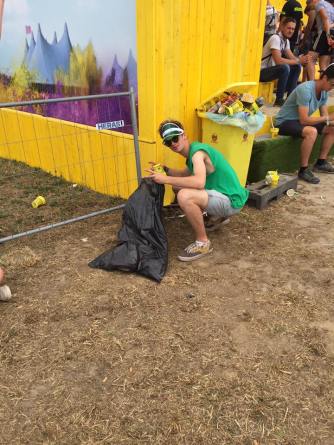 lilly among clouds – Love U 4ever

Every now and then a ray of light
will melt the loneliness in your heart.